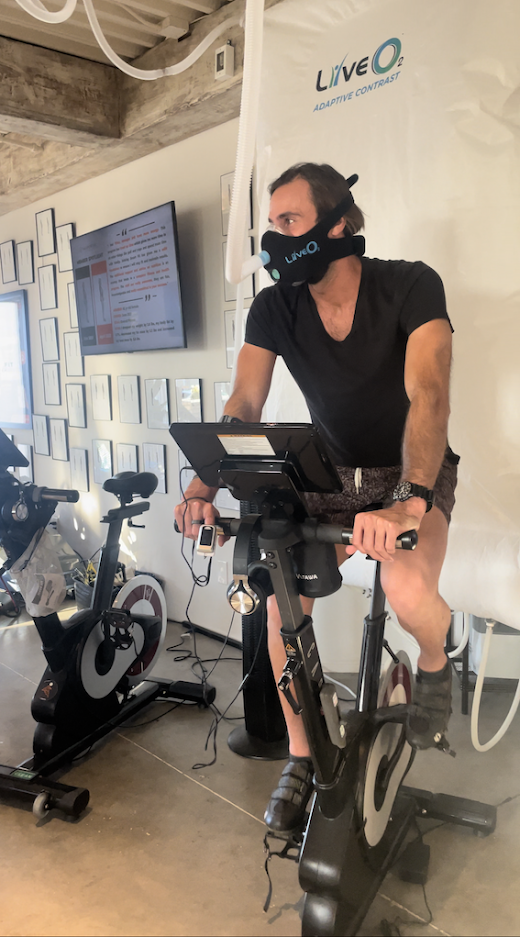 What would your body do with extra oxygen during exercise if it had it? Quite a lot, it turns out. With added O2, our blood can pick up that extra oxygen and distribute it throughout our tissues, helping them eliminate toxins and waste more efficiently, thereby allowing our cells to function better. Oxygen also helps to neutralize acids in our body, like lactic acid resulting from muscle overload. When our body’s chemical reactions are “fired-up” by increased oxygen levels, we burn fat more efficiently, sleep often improves, and we feel better all-around.

Because breathing in higher levels of oxygen will work to improve the health of your blood, cells and microvessels, hyperbaric therapy chambers have been used for several decades to support the recovery of certain injuries, non-healing wounds and infections. But this is even more true when you do Exercise With Oxygen Therapy. In fact, a relatively new therapy, called LiveO2, does everything that hyperbaric therapy (HBOT) does and more and in far less time.

What is LiveO2 THERAPY and How Does it Work?

LiveO2 therapy gets massive amounts of oxygen into the cells in a very short amount of time—just 15 minutes. The simple basis of breathing high levels of oxygen while exercising has now been maximized through modern research and technology whereby the higher oxygen level in the lungs creates a greater head of pressure to drive oxygen into the pulmonary capillaries, then active exercise moves the circulation faster, ensuring a greater oxygen carriage throughout the body.

LiveO2 therapy also uses adaptive contrast training, which simulates altitude training (like training at 14,000ft elevation) with intervals which allows you to get vasodilation, driving oxygen further into the cells. According to LiveO2’s research, in the first 15 minute session, any inflammation in the capillaries will begin to be lowered and a layer of toxins will start to clear. “Oxygen will rush into the cells bringing the energy and the physiological processes necessary to heal.”

LiveO2 is based on something called, Oxygen Multi Step Therapy, which was invented by Dr. Manfred von Ardenne (1907 to 1997), an award-winning German scientist and inventor the first high-resolution scanning electron microscope. What Dr Von Ardenne discovered was that when the body is alternately deprived of and then supplied with extra O2, it performs far better. The practice later became known as EWOT (pronounced e-watt ) and is still a mainstream medical practice in Germany today.

Traditionally, EWOT has used a ‘trickle’ method: inhaling a supplemented oxygen source of 5 to 10 liters per minute through a cannula or rebreather mask while exercising. In that way, the body receives higher levels of oxygen than what is available from room air and the benefits of added oxygen can begin to take hold.

That traditional method of EWOT becomes therapeutically effective at about 9 hours, according to the research of Dr. von Ardenne, who eventually wrote the book on Oxygen Multistep Therapy. Von Ardenne’s earlier iteration of this practice used to take as much as 32 hours to do what can now be done in 15 minutes due to the amount of oxygen consumed with LiveO2 therapy.

The Benefits of LiveO2

According to the science behind LiveO2, this practice can:

Add to this list many more of the benefits of EWOT that can be attained all in a much shorter period of time and you can start to see why LiveO2 is something we’ve worked hard to bring into The Smart Fit Method.

If you’re interested in trying LiveO2 while you perform your Smart Fit workout, come check out our new LiveO2 offering at our Cardiff location and experience all the health and aging benefits of EWOT in a quick, time-saving method, today!